To enable dialogue between the expertise of the different research communities and encourage mutual learning and conceptual innovation, WORCK has established four working groups representing four different methodological approaches to the study of coercion in work relations. Instead of dividing up into sub-themes (i.e. slavery, serfdom, care work, military labour etc.), all research topics shall be represented in all four working groups. 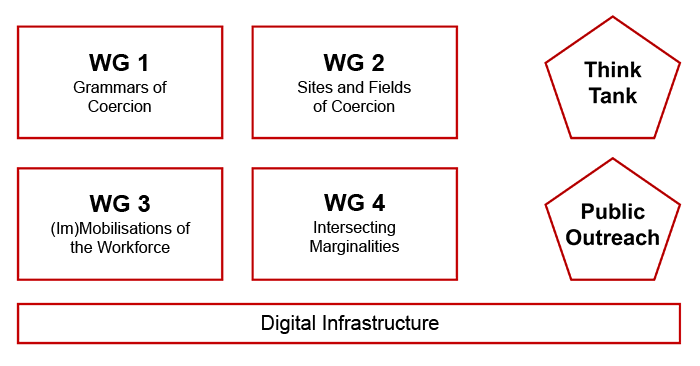 Grammars of Coercion (WG 1) analyses social taxonomies through the study of semantic settings and seeks to develop a new analytical language to think and speak about bondage and coercion in a long-term and globally comparative perspective.

Sites and Fields of Coercion (WG 2) studies the logic of deployment in a specific site of coercion and how these sites relate to broader fields of coercion.

(Im)Mobilisations of the Workforce (WG 3) targets the spatial dimension of related coercions, bringing together processes and experiences of displacement as well as of forced immobilisation.

Intersecting Marginalities (WG 4) addresses the interaction of competing “marginalisers” (such as origin, ethnicity and race, religious and cultural affiliation, legal status, age as well as gender and sexual orientation) in the making of asymmetrical power relations.

The Think Tank group provides a laboratory for new analytical ideas and questions concerning labour coercion with the aim to develop research agendas that are not (yet) covered by the existing structure of WORCK. The Think Tank also coordinates the exchange with other labour and social history networks worldwide and organises the Think Tank Meetings during the WORCK Meetings.

The Public Outreach team expands contacts with stakeholders outside academia such as NGOs, representatives from the education sector, policy makers and international institutions as well as representatives from the media and the cultural field. It gathers and coordinates ideas for round table discussions or non-academic events within WORCK and in cooperation with external partners.