How does Covid-19 affect the groups of society that have already lived pretty isolated before the crisis? Refugee and migrant families often struggle to find their place in the societies they migrate to. In Vienna as in other cities of the Western world, the challenges of cultural difference and language barrier are often multiplied by unemployment or the prohibition of employment. Social contacts with the majority group in society are very little.

How does Covid-19 affect the groups of society that have already lived pretty isolated before the crisis? Refugee and migrant families often struggle to find their place in the societies they migrate to. In Vienna as in other cities of the Western world, the challenges of cultural difference and language barrier are often multiplied by unemployment or the prohibition of employment. Social contacts with the majority group in society are very little. 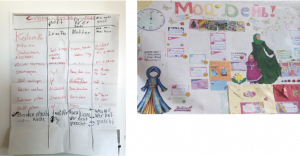 The project NACHBARINNEN, founded in Vienna in 2012, assists refugee and migrant families who, for one reason or another, live isolated with hardly any contact to the local population. The motivation for this initiative was a strong concern for the future of these families – a concern, first of all, for the weakest members of these families: the children and women. That’s exactly the point where the work of the project starts. It helps to empower the women of these families and seeks to improve their access to the social infrastructures of the majority society.

NACHBARINNEN are women with different migration backgrounds and mother tongues who are trained and subsequently employed by the project. Right now, the project employs seven NACHBARINNEN from Somalia, Chechnya, Turkey, Sudan (for Arabic speaking families) and from Afghanistan. These women approach migrant and refugee families from their own cultural background and accompany them, initially in their own language, through little barter trades on their way into the Austrian society. These barter trades include helping with trips to the authorities, giving children private tuition, introducing the families to educational and cultural facilities, assisting with finding a job – in exchange for integrational steps. As barter, the project strongly encourages language courses and integration into our society, education, employment, support for children, and violence prevention etc.

By helping people to help themselves, these assisted families learn very quickly how to use of the facilities the city has to offer by themselves. This integrational work has recently been evaluated by the Vienna University of Economics and Business and was graded as extremely successful tool.

How Covid-19 Changes the Division of Work at Home

Since the beginning of the corona crisis, the work of the project has changed significantly. Our NACHBARINNEN have switched from physical accompaniment to telephone contact and online consulting. In the beginning, this work seemed futile. The social isolation prescribed by the state authorities in order to lower the risk of infection hit these families particularly hard. Suddenly, the whole family was locked into small living quarters, and if one family member had a job before it was most certainly no work that could be done in home office. Nearly all of them lost their job, some were registered for short-time work, but they all were at home.

On the top of all this, there were the huge uncertainties about how to handle home schooling, where to get information, and how to discern fake news. In this situation of cramped accommodation, confidential conversations leading to new practices of self-empowerment and social integration were no longer possible. At the same time, the project sought for new ways to achieve the their goals – even and all the more under these difficult circumstances.

It soon became obvious that the unpaid work like housekeeping and nursing of relatives, done by the female members of these traditionally living families, was massively intensified by Covid-19. The male family members were more demanding and put more pressure on their wife and daughters. Domestic tensions, quarrels and even violence increased significantly. This was when the NACHBARINNEN intervened. With their help, plans to establish new family structures were worked out. In family conferences, sometimes implying very emotional debates, they helped to list tasks and to organise the fulfilment of these tasks. Massive resistance had to be broken with clever and steadfast arguments.

The families sent pictures of the work plans they had established. Regular telephone contacts made sure that all family members stuck to the arrangements. Theoretical plans slowly became reality. And very surprisingly, after only seven weeks of lock-down the NACHBARINNEN had achieved family situations that had never been achieved as quickly in the past.

A woman who is capable to distribute her unpaid work to all family members, who is able to transfer tasks with a very traditional female connotation to male family members is truly empowered. She is a woman who, at the end of this mandatory isolation, will want to attend German lessons, strive for an educational attainment, enhance the education of her daughters rather than have them married off early. Feeling this new freedom, she will be able to reorganize her own life and the life of her whole family.

Besides the personal accompaniment of the NACHBARINNEN, the project also runs a textile workshop for five years now. Here, women from these accompanied families (who very often have no formal education) are trained to be textile workers and can be employed by the project – as long as the financial situation allows. Using old materials from companies or festivals, these textile workers produce bags, rucksacks etc. Their products are sold or used as promotional gifts by these companies (Wiener Stadtwerke, Wiener Linien, Wiener Festwochen etc.).

In March, the workshop had to be closed due to corona crisis as the work was not considered as relevant production. As project leaders, we registered our employees for short-time work. In the following weeks, we experienced first-hand the misery of these women. Albeit being part time employees, they now had to stay at home and thoroughly missed the benefit of having a job. Instead of distributing their homework among other family members, they slipped back into the old role. Even being employed in a low income job which often didn’t generate a significant monetary profit, working 20 hours per week in our textile workshop had become a treasure for them.

In early April, each and every one of these women had started to sew masks. Having creating good cuts, they approached us with the idea of opening the workshop. As a result, we contacted those for whom we had produced bags in the past and quickly received orders for the mass production of masks. Since then, our women have worked significantly more than ever before in order to fulfil all orders. They work on weekends and take some of their work back home. We now are able to employ an additional seamstress and two interns. Every week, our seven seamstresses produce and send off 2000 masks. With the revenues we receive, we are able to compensate the loss of two sponsors who stopped their payments due to corona-related economic problems.

The women know that they will be remunerated for their additional working hours even though the referrals can only be made after the time they have been registered for short-time work. The incredible increase in productivity has been made possible due to the excellent leadership of the workshop on the one hand and thanks to the very high appreciation of the workplace by the seamstresses.

How does Covid-19 affect the groups of society that have already lived pretty isolated before the crisis? By individual accompaniment in their respective native language and innovative ideas how to deal with difficult situations, the families supported by NACHBARINNEN not only take up the challenge, they even emerge empowered from this world wide crisis.

All this of course under the condition that our NACHBARINNEN are empowered by sufficient funds to continue their valuable integration work.