On the morning of 4 April, many of us were shocked to see a rush of people towards Dhaka. This was an alarming scenario as the country was supposed to remain under lockdown due to the risks of spreading Coronavirus. Even the public transportation services are suspended to limit movements of people.

On the morning of 4 April, many of us were shocked to see a rush of people towards Dhaka. This was an alarming scenario as the country was supposed to remain under lockdown due to the risks of spreading Coronavirus. Even the public transportation services are suspended to limit movements of people.

Why did all these people try coming to Dhaka by any possible means – even by walking hundreds of kilometres? Because, we are the second largest Ready-made Garment (RMG) exporting country of the world and Dhaka is the centre of USD 5 billion worth of production hub. It was an indication of what a treasure hunt of profit entails for the 4.5 million RMG workers in the neoliberal capitalism. To win a share of the disaster capitalism, the warriors – the garment workers – were supposed to start production at the earliest.

Late in the evening of 4 April, the president of the Bangladesh Garment Manufacturers and Exporters Association (BGMEA) has requested closure of all the factories during the shutdown period. But by then many had travelled to Dhaka and many were stuck in between. They were again trapped into uncertainty. Even then, as an institution BGMEA restated that they cannot force any factories to remain closed. The government either did not asked the factories to shutdown rather only talked about measures to ensure salaries of the workers on time, to justify their questionable actions. 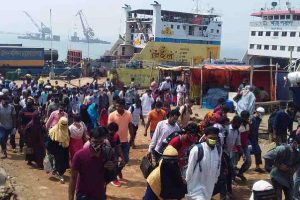 Thousands of readymade garment (RMG) factory workers started heading back to Dhaka from northern and southern districts on 4 April 2020. Photo: The Financial Express

The workers were forced to go through this toil as many did not receive their pending salary before the shutdown started on 26 March and are likely to lose their jobs if they would not report to the factory as and when instructed. The testimonies of the returnee garment workers revealed such concerns. During the rush to Dhaka, at least two workers died, and many were injured as per news reports. Whom should we hold responsible for such losses? Surely, not the Coronavirus.

Before the shutdown began, authorities always suggested that factories may continue production if they can ensure health guidelines of WHO. But anyone who ever visited a garment factory can readily understand, maintenance of social distance is nearly impossible given the labour intensiveness of the production lines. During my research in garment factories, I have seen that thousands of workers do not use masks because of discomfort even though it is highly suggested to reduce respiratory diseases.

BGMEA have asked factories to install hand washing points in the factories; unfortunately, only hand washing will not protect the workers from virus transmission. Anyone who has seen mass of workers in the streets and to enter or exit from a factory knows social distancing is not possible in the crammed staircase or roads.

If during the lunch hour, workers try to exit the factory maintaining the suggested social distance, many workers even might not be able to get out of the factory in time. All workers are even body-searched by security guards while exiting the factory. These factors are likely to limit social distancing and thus, increase possibilities of virus transmission.

While the Coronavirus is highly contagious, why were the workers asked to report at factories for work? Most likely and regrettably, these workers comprise a section of our population that the current economic philosophy may risk abandoning in a treasure hunt ensued by the Covid-19.

As most of the garment workers are young, many might overcome the possible infection with mild symptoms but why was the risk taken? The answer will again be an eagerness to participate in the global gold-rush. Naomi Klein has recently argued, the Coronavirus capitalism will shower aid on the interests of the wealthiest section of the population but will offer nothing for most of the workers.

According to Penn State Center for Global Worker’s Rights, around 1 million workers were fired or furloughed amid Coronavirus crisis. In a lay-off situation, workers get half of the basic salary and housing allowance. Whereas, other salaried employees have gotten paid leave for the shutdown period.

Even after widespread criticism, as many as 130 factories were operating on 7 April in Dhaka’s Savar and Ashulia areas, according to a report of the Daily Star. There were also reports of workers’ protests demanding factory closure and salary of March. Hence, many workers would lose their jobs having allegation of “creating disruption” in production and face legal actions.

The events occurring over the last one week reveal nature and extent of the coercions RMG workers go through to keep the apparel supply chain of the world on track. Previously, the price of the unrelenting profit seeking was paid by the workers – evinced by the Rana Plaza disaster of 2013 that killed more than a thousand workers. The workers are again forced into extreme risks.

Global brands – the retailers cannot shed off the responsibilities for risking the workers’ lives. When many retailers have come forward to announce that they will not cancel orders, the suppliers were stirred to open the factories as payments are made only after the products are shipped. As the shops are closed, many retailers have put production on hold, thus, emanating uncertainties for the factories and the workers. The retailers and factory owners both are unwilling to bear any cost that the Coronavirus. Hence, the RMG workers are rendered into a helpless situation.

Considering the current market situation, many of the factories are likely to delve into producing Personal Protection Equipment (PPE) and facemasks as these are now in high demand. The president of the BGMEA has announced a few days ago that they are eyeing to export PPEs and they want to do it fast.

The pandemic has started of a treasure hunt as evinced by the fact that there is an on-going race to stockpile facemasks and PPEs around the world. According to a report by the Guardian, few days back US businesspersons offered three times the price than what the French were paying to take over a cargo of masks on the tarmac of an airport just before the flight from China.

Many other mask producing countries have stopped exporting and started renegotiation of the prices. Lately, the USA is accused of hijacking 200 thousand facemasks that were destined for Germany. The freights were diverted to the USA as the producing company was instructed not to export these high demand products.

The USA has even activated Defense Production Act to force local companies to cease exporting and bring back all the production from overseas factories. We can identify a similar exclusionary practice if we analyse the trade and politics surrounding pharmaceuticals and medical products.

These incidences reflect a growing demand of products where our garment factories can vie for a share. For this to happen, the early the factories open, the better. Amid widespread criticism many factories started production while the country is under shutdown. Thus, a segment of the population is deemed perishable. Since yesterday, events of abandonment are unfolding before us.

The crises caused by the pandemic have yet again exposed the vulnerabilities created by tendencies to expand, accelerate, and scale up of production and profit – ardent features of the neoliberal capitalism.

Mohammad Tareq Hasan is an anthropologist and teaches at the University of Dhaka.